History of Tea in Japan

History of Tea in Japan

Although green tea was first introduced to Japan from China, it has since been refined and perfected and has become one of the enduring symbols of Japanese culture.
The first reference to tea in Japan appeared in the records from the Nara period (646－794). It can be assumed that tea was already being enjoyed at that time. In the early Heian period (794－1185), the Buddhist monks Saicho (767－822) and Kukai (774－835) went to China to study, and brought back tea leaves and seeds to Japan where it soon became popular at the court in about 805. It is believed that the cultivation of tea in Japan began around that time. In this era, tea leaves were pressed into a hard block form and was known as dancha. Dancha was prepared by scraping tea leaves from the block into boiling water, as prescribed in the book Ch'a Ching. After some years dancha lost popularity in Japan. 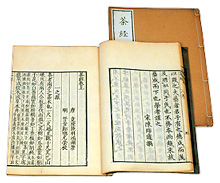 Second Introduction of tea to Japan

In the early Kamakura period (1191), Eisai (1141－1215), the monk who founded the Rinzai Zen Sect in Japan, returned from a pilgrimage in China. Eisai brought tea seeds from China, which were first planted in Kyushu. Later he gave seeds to Myoe, a high-ranking monk, who planted the tea seeds at his temple, Kozanji, in Tagano-o, a former town in the northwest of Kyoto.
Along with the tea seeds, Eisai introduced the Sung style of preparing tea: tea leaves were grounded into a powder, and hot water was poured on it to make a beverage. This powdered form of tea was not only consumed for its medicinal properties, it was used by priests to stay awake during extended periods of meditation. To explain the numerous merits of tea, how it should be cultivated, prepared and consumed, Eisai wrote a book called ‘Kissa Yojo Ki’ which is the first known book of tea in Japan.

Although its use in China became extinct, the production and art form (Chanoyu) that surrounds this powdered form of tea, matcha, has flourished and has been continuously refined in Japan even today. 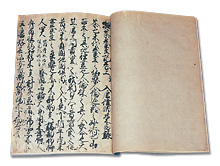 While in China, the drinking of powdered tea ceased during the turmoil of the Mongol invasion, in Japan tea was starting a new birth. Monk Myoe began cultivating tea in northwest Kyoto but felt the tea trees needed a more suitable climate. Ultimately he chose a foggy village called Uji located in the south of Kyoto. The tea cultivated on the banks of the Uji River is called Uji-cha and benefitted from the rich soil and high quality water of the region. Soon, Uji, considered the highest-ranking tea producing area in Japan, became well known for its superior quality Uji-cha. Eventually the shogun Ashikaga Yoshimitsu (1358－1408)，who built Kinkakuji (1397), the famous Golden Pavilion Temple, created six tea plantations to supply him with tea for his personal consumption and for the lavish tea parties he regularly hosted. These six plantations were called Uji Rokuen，or the Six Tea Gardens of Uji.
Around this time the cultivation of tea was also undergoing a transformation in Uji. The technique of covering young tea buds to improve their flavor began, and the quality of the tea was steadily improved through careful processing. Similar to Shogun Yoshimitsu (1358－1408), later shoguns such as Toyotomi Hideyoshi (1536-1598) supported tea makers in Uji. Later, Tokugawa shoguns held an event called Chatsubo-Dochu, in which large decorated tea jars (chatsubo) which were filled with newly harvested tea, were carried in a parade from Uji to the home of the shogun. Uji-cha was thus constantly supported and promoted by the rulers of the country particularly for the sake of ""Chanoyu"". This high quality tea is still being produced in Uji, the home of Marukyu Koyamaen and comes in three main types: sencha, gyokuro and matcha.

Invention of Sencha and Gyokuro

Around the middle of the 18th century, Uji tea makers got the idea of rolling tea leaves to crush the cell walls which allows a faster infusion of the tea. This special method of rolling the tea leaves, known as Uji Seiho allows green tea to have a more intense flavoured when brewed tea. The process has been refined over the years and is still being used today.
After the middle of the 19th century, this tea rolling method was applied to create a new premium quality tea called Gyokuro. Just like the tea trees for matcha, trees for gyokuro are also shaded (although for a shorter time) and therefore have some of the same properties as matcha. Gyokuro leaves however are treated with the Uji Seiho method of rolling the leaves. Due to the combination of shading the tea tree and rolling the leaves, Gyokuro, is a premium grade of loose green tea. 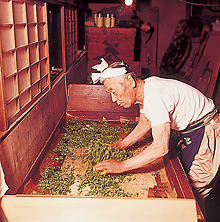 Powdered green tea, matcha, is the basis of the Japanese art form 'Chanoyu' or `The Way of Tea', commonly known as tea ceremony in the West. The heart of Chanoyu is that matcha is prepared following a set of rules, in a specific order, using specified utensils. Matcha was originally prepared by temple priests using simple rules. In each historical period, the art of tea underwent many changes spearheaded by the ruling Shogun and the leading tea masters at that time; this was reflected in the types of utensils used, and whether tea was enjoyed simply or lavishly.
At one point, Chinese utensils dominated Chanoyu, so did tea tasting competitions in which people won very expensive prizes for guessing Uji tea separate from other lesser quality teas.
Tea was mostly enjoyed by the shogun class, in very large rooms decorated with expensive Chinese utensils. However , in the Muromachi period (1392－1568), Chanoyu, took a new direction under the influence of two tea masters Murata Shuko (1423－1502) and Takeno Joo (1502－1555). They introduced a tea hut consisting of a tearoom approximately 6 x 6 feet with an attached preparation room. Shuko and Jo'o shunned expensive Chinese utensils and artwork, and focused on Japanese utensils in their style of Chanoyu. The efforts of these two tea masters made tea drinking increasingly popular among people in the merchant and non-shogun class.

In the following Momoyama period (1568－1615), Sen Rikyu（1522－1591）a tea master originating from the merchant town of Sakai in Osaka, became the leading figure in the world of tea. Sen Rikyu was the tea advisor for the shogun Toyotomi Hideyoshi. While Hideyoshi preferred a very lavish, showy style of tea, Sen Rikyu was drawn to a quiet, humble style of tea. Sen Rikyu streamlined the utensils used in tea and created a set of procedures for the preparation of tea. Sen Rikyu's subdued aesthetics combined with the formulated ways of preparing and partaking of tea eventually determined the style of tea that now exist in Chanoyu today. 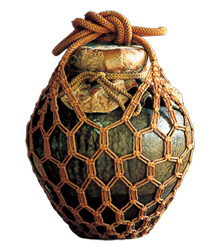